Spring in the Highlands 2018

This was the last of the three week-long tours taking place in May. The group had several highlights which included scarce and uncommon birds in Northern Scotland. We were fortunate to see lingering winter geese which included Pink-footed and Barnacle. Scarce breeding species of the north comprised of Whooper Swan, Wood Sandpiper and Common Goldeneye. In the mountains scarce species included Rock Ptarmigan, Ring Ouzel, Snow Bunting and a pair of Eurasian Dotterel. The Slavonian Grebes continue to hang on whilst a female Hen Harrier near Thurso was a bonus. Crested Tits started to appear again after the main breeding time and Wood Warblers entertained us in the birch woods. Red and Scottish Crossbills seen on the final day was a welcome sight. I am sure the following report and birdlist will bring memories of an enjoyable tour in the Highlands.

I started the tour by picking up Harry and Rochelle in Inverness and Graham at the airport. From here I travelled east towards the coastal town of Nairn. A walk along the east beach jetty allows views into the Moray Firth and adjacent beaches and river. On the beach a good selection of gulls including Great Black-backed, Herring, Black-headed and Common. Overhead views of Barn Swallow, House Martin and several Common Swifts. A visit to the nearby Nairn River revealed a pair of Mute Swans with newly hatched cygnets, Goosander, Grey Wagtail, Eurasian Wren, Eurasian Blackbird and Song Thrush. It was time to move on towards the Pictish capital of Burghead where the rocky foreshore and offshore waters attract birds. On arrival a pair of Rock Pipits showed well on the cliffs and among the sea thrift. Offshore a steady stream of seabirds included Northern Gannet, Great Cormorant, European Shag, Northern Fulmar, Black-legged Kittiwake, Sandwich Tern and groups of Common Guillemots. A few waders were seen including Eurasian Oystercatcher, Ringed Plover and Dunlin. Lossiemouth is further east with the pig farm attracting Lesser Black-backed Gulls in their splendid summer plumage. A pair of Red-legged Partridges were also seen before arriving at Lossiemouth east beach. Literally hundreds of gulls here comprising the commoner species. Inland is Loch Spynie which has recently come under the management of the RSPB. The woodland and scrubby area before the loch was good for Willow Warbler, European Robin, Common Chaffinch and Dunnock. From the hide Common and Arctic Terns on the raft plus Little Grebe, Tufted Duck and Common Moorhen on the loch itself. Nearby the feeders attracted Great Spotted Woodpecker, Great, Coal and Blue Tits and European Greenfinch. On the return walk we noted Blackcap, Common Whitethroat and Yellowhammer. Back to Inverness railway station to pick up Brian and onto Cygnus House our base for the week.

Today I headed westwards to the remote and sparsely populated area of Wester Ross. I made the decision to visit Strathconon along the route which paid dividends as a male Wood Warbler was in full song among the birch trees. Nearby a Common Cuckoo flew past before disappearing into the forest. Next on the agenda was the birding hot-spot of Achnahalt. On arrival a scan of this shallow loch and marsh revealed Canada Goose, Tufted Duck, Eurasian Wigeon and hawking Barn Swallows and Sand Martins. Further along the road another stop added Wood Sandpiper, Common Snipe, Eurasian Teal and a singing Reed Bunting. In a patch of woodland a singing Common Chiffchaff and Common Buzzard hovering over an open area. I progressed to the village of Gairloch and the loch of the same name. Red-breasted Mergansers offshore and a wide range of gulls loafing on the beach. Loch Ewe is always a good place for finding birds and today was no exception as Red-throated, Black-throated and Great Northern Divers were present in the upper part of this long sea loch. Lunch was taken at the campground with a White Wagtail on the beach and two European Golden Plovers on the beach with Dunlin and Ringed Plover. After lunch a pair of Twite perched on a fence allowing good views. Our last stops were at Laide and Gruinard Bay where the group located a late Whimbrel and Rock Pigeons. In the sheltered part of the sea Northern Gannet, Common and Black Guillemots and flocks of Arctic Terns heading north.

An early start today to Corrimony where I met up with Simon the warden. By 0515 the group were watching lekking Black Grouse at close range. This fascinating experience is one of the best in Britain as you are very close to these extraordinary birds. Also present in the adjacent area were Mistle and Song Thrushes, Willow Warbler and Tree Pipit. On the return journey a stop in the oak-woods produced views of a male Common Redstart, Crested and Long-tailed Tits and Goldcrest. Breakfast was taken in Inverness and then down the A9 to Cairngorm National Park via the tourist town of Aviemore. Once at Cairngorm we joined the railway to the top and embarked on a walk towards the summit. The birds were playing hard to get this morning apart from Northern Wheatear and Meadow Pipit. At the summit a change of luck as a pair of Rock Ptarmigan were playing hide and seek behind a large boulder - good views in the end. I then had news about a pair of Eurasian Dotterel which meant going back up the trail for 500m. Close views in the end of this beautiful mountain bird. Things got even better as two pairs of Snow Buntings were located close to the path, this can be a very tricky bird to find in the park. Back down to the car park where a male Ring Ouzel was collecting food on a grassy bank. A short stop at Loch Morlich added Common Goldeneye, Goosander, Common Sandpiper and Black-headed Gull to the day list. It was time to visit the Findhorn Valley where the lower sheep fields held Northern Lapwing, Eurasian Curlew and Meadow Pipit. On the river views of White-throated Dipper and Grey Wagtail. No raptors today so a slow drive along the Farr Road with confiding Red Grouse for company a fitting end to a long day. 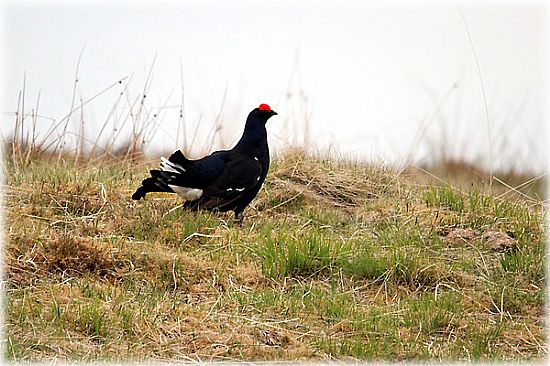 I left Cygnus House for Ullapool just before 0800 hours. The drive went fairly quickly despite heavy traffic caused by road works. At Ullapool a stop at the point revealed Red-throated Diver, European Shag and Common Eider offshore. The gull roost had Great Black-backed, Herring, Common and a Glaucous Gull. Our journey passed through spectacular countryside towards Kylesku a hamlet with scenic views towards the mountains. A rocky islet held Arctic Terns whilst the mussel farm was attracting Common Eider and Black Guillemot. At Scourie a croft gave us views of a Sedge Warbler singing and displaying from a bush. On the other side of the inlet a reedbed had Reed Bunting, Eurasian Wren and a Spotted Flycatcher in the manse gardens. It was time to visit Handa and its impressive seabirds. The weather ensured the island was overflowing with tourists so the group had to wait for a ferry. Once on Handa we had great views of Great and Arctic Skuas and on the cliffs Common Guillemot, Razorbill, Northern Fulmar and Black-legged Kittiwake. On this visit the Atlantic Puffins were playing hard to get but eventually good views at the Great Cliff. Back to the mainland and up to Durness. I dropped supplies off at the guest house and visited Balnakiel Bay which was rather quiet today apart from four Wood Sandpipers on a seasonal pool. Dinner taken and off to Balnakiel again with a visit to the farm and marsh. A lot had happened in the last week as fewer birds were present. Careful scanning revealed Whimbrel, Common Redshank, Northern Lapwing, Northern Shoveler and Gadwall with the last two species being uncommon in Northern Scotland. Another look in the bay where a few Great Northern Divers had appeared since our afternoon visit.

After breakfast I headed along the coastal road towards the Hope Valley. En route we encountered a family of Common Stonechats and numerous Northern Wheatears. On entering the Hope Valley a Whooper Swan was located in a marsh with its mate hidden in cover no doubt. Common Snipe were calling but no sign of the resident Golden Eagles on this particular visit. I decided to take the inland route to Bettyhill which takes in some of the remotest parts of Britain. Near the end of the road near Bettyhill I located a Whinchat singing from the top of an oak tree, excellent views of this declining summer visitor. In the village a calling Lesser Redpoll and the commoner birds. Sandside Bay was reached where the beach attracted Ringed Plover, Dunlin and Eurasian Oystercatcher. Within the bay Northern Gannet, Sandwich Tern, Common Guillemot, Razorbill and a single Atlantic Puffin. Picked up lunch in Thurso after visiting Scrabster with its Common Eiders and numerous gulls. At Dunnet Bay the sheltered waters held Great Northern and Red-throated Divers, Great and Arctic Skuas and a group of Common Scoters. St John's Pool is always a delight to visit with close views of Black-headed and Common Gulls, Arctic, Common and Sandwich Terns, Common Redshank and a few ducks - Northern Shoveler and Tufted Duck. I decided to visit Broubster Leans before heading south. This paid off as we watched a female Hen Harrier quartering over the marsh for prey.

Down the A9 this morning to Grantown-on-Spey and a walk through the native pinewoods at Poorhouse Wood. In the car park singing Goldcrests. The group spent almost two hours walking the trails in search of birds with sightings of Great Spotted Woodpecker, Great, Coal and Crested Tits, Tree Pipit and Mistle Thrush. I then moved onto Feshiebridge for another walk in similar forest. Not too much here on this visit with the meadows holding Northern Lapwing, Greylag Goose, hunting Common Buzzards and displaying Meadow Pipits. A diversion to the Findhorn Valley had similar results to a few days ago. We ended the day at Udale Bay where Pink-footed and Barnacle Geese fed on the salt marsh, late migrants as they were gone the next day. A drake Eurasian Wigeon was feeding in the burn and an Osprey perched on a distant post. Further searches towards Cromarty added Common Eider, Red-breasted Merganser and Whimbrel for the day.

Our final full day of the tour started with a trip to the two lochans which make up Strathpeffer. On arrival the lower lochan and surrounds held a singing Whinchat and a hunting Red Kite. On the water several Little Grebes, Common Coot and Mallard. A short drive away is the upper lochan where we located Slavonian Grebes in their superb summer plumage. A group of Common Swifts flew overhead before disappearing from sight. It was time to visit Embo and the high tide birds which roost on the rocky shore. At Embo we passed through the campsite and walked along the old jetty. A little bit of searching revealed a party of Bar-tailed Godwits, Red Knot, Dunlin and Sanderling. Offshore waters held European Shag, Great Cormorant and Common Eider. A drive followed along Loch Fleet and towards The mound an enclosed area where the water level is controlled by gates. The mud areas held Common Greenshank, Common Sandpiper, Eurasian Curlew, Pink-footed Goose, Red-breasted Merganser and Goosander. I then took the back route to Bonar Bridge after visiting Brora. From here it is only a short distance to the mature pinewoods of the Novar Estate. On entering the car park close up views of a Spotted Flycatcher sallying for insects. The walk through the forest produced the common woodland species, Tree Pipit and a party of Common Crossbills. Our persistence eventually paid off as a Scottish Crossbill was located sitting quietly in a mature pine. Back to Cygnus House where the tour concluded for the week.