This was a private trip for clients from the West Midlands who I met off the Birmingham flight into Inverness. The earlier rain showers and winds had died down as we headed towards Inverness to join the A9 northwards towards Thurso. Several fields had substantial flocks of Pink-footed Geese feeding up before the long migration northwards towards Iceland, Greenland and NE Canada. I decided to stop beyond Invergordon and look into the Cromarty Firth. Despite the chilling wind we managed to locate several Slavonian Grebes, Common Eider and the common wader species. After lunch the next stop was at The Mound an extension of Loch Fleet. At the end of the loch an Osprey was ripping a fish apart and watched by a pair of Hooded Crows. Our journey took us northwards to Thurso and our accommodation nestling in a forest close to the Pentland Firth.

This morning I set off in an easterly direction to the village of Durness which is the most NW point in the British Isles. The road meanders through a mix of moorland and mountains with indented sea lochs and offshore islands. The usual birds were around the hotel and included skeins of Pink-footed Geese and a party of Whooper Swans setting off for Iceland and beyond. Arrived in Durness village where every garden appeared to have groups of Redwings another Iceland bound migrant. A quick look into Balnakiel Bay revealed Red-throated and Great Northern Divers, Slavonian Grebe and a displaying Rock Pipit. A walk towards the seasonal pool was rewarded with groups of Whooper Swans and Greylag Geese. Scanning into the pool added several duck species including Gadwall, Eurasian Wigeon and Mallard. In a distant field a flock of European Golden Plovers, displaying Skylarks and Northern Lapwings. On the return walk three Sandwich Terns flew over an unusual sight inland. Loch Eriboll was next on the agenda with an offshore island holding almost 500 Barnacle Geese A look into Loch Eriboll added an Iceland Gull and several Slavonian Grebes. A real surprise was in store when a pair of Common Cuckoos were seen perched on roadside wires. The road into the Hope Valley is rarely used which was to our advantage. Great views of a Eurasian Woodcock, Grey Wagtail and calling Lesser Redpolls. Luck was with us as a pair of Golden Eagles showed well drifting along the cliff edge. Our last stop was the village of Bettyhill with its stunning beaches and landscapes. Not much to start with until a male Merlin flew past at high speed. In the estuary Greenshank and Ringed Plover, Northern Wheatear and another bonus in Eurasian Magpie a rare bird in these parts.

Thurso and the surrounding countryside has a wealth of interesting places to bird in and today was no exception. The hotel grounds at Forss held the usual species plus singing Goldcrests. First stop was Sandside Bay next to Dounreay power station a site with a chequered history. The tide was coming in with exposed rocks holding Purple Sandpipers and a single Red Knot. Back towards Thurso and Scrabster Harbour where the long-staying Iceland Gull was still around. The harbour allowed great views of Common Eider, Herring and Great Black-backed Gulls in a variety of plumages. Dunnet Bay is always a good spot with today producing Great Northern and Black-throated Divers, Long-tailed Ducks, Common Guillemot, Razorbill and Sandwich Terns. St John's Loch was rather choppy although we picked out Tufted Duck and Common Goldeneye. Off to Dunnet Head the most northerly point in the British Isles. Offshore thousands of Razorbill, Common Guillemot and a few Northern Gannets and Atlantic Puffins. Northern Fulmars and Black-legged Kittiwakes were already on the cliffs holding territory. Loch of Mey is not too far away with a hide overlooking this shallow loch. A careful look added Northern Pintail, Red-breasted Merganser and Lesser Black-backed Gull. Our last stop was at Broubster Leans where we heard singing Common Snipe. In the reeds and marsh a herd of Whooper Swans whilst a fallow field attracted a flock of Bramblings. It was getting cold so I headed back to base after a great days birding in and around Thurso.

Checked out to head south through the flow country of Sutherland. A huge, vast area which is a difficult place to birdwatch in with limited access. To the north of Forsinard we encountered our first Red-legged Partridges of the tour. I stopped at an elevated position to scan the landscape, we were lucky on this occasion to find a pair of Hen Harriers hunting over this bleak landscape. In the grass fields a few European Golden Plovers were feeding quietly by the roadside. A stop at Brora produced nothing of note so we headed to Embo where the tide was rising and sea looked quiet angry. A few waders included Ringed Plover and Purple Sandpiper plus a few passing Black-legged Kittiwakes. Loch Fleet is close by where I was surprised to see Razorbills sheltering from the sea. The Mound had similar birds to a few days ago plus Greenshank. Last stop was at Tain where the commoner ducks included Shelduck, Eurasian Teal and Eurasian Wigeon. Back to Inverness for the concluding part of the tour. 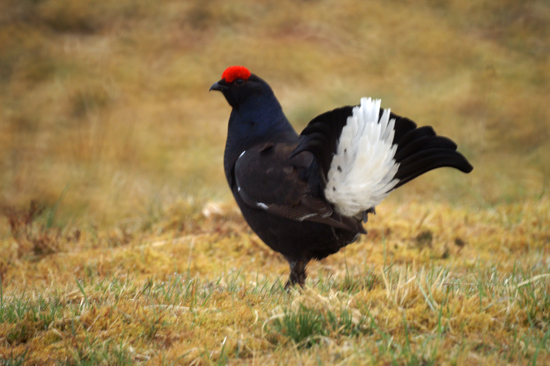 Today was spent in the wilds of Wester Ross a sparsely populated area of Scotland with spectacular mountains and indented sea lochs and islands. En route to Achnahalt the Osprey had returned to its nest among a pylon. On reaching Achnahalt a check of this shallow water body added a single Red Kite, Common Buzzard, Red-breasted Merganser and Eurasian Curlews. A diversion at Achnasheen allowed us to watch a Greenshank feeding and calling on the loch edge. Next stop was at Kinlochewe a small village with woodland which appears to attract birds on a regular basis. On arriving at the car park a Common Chiffchaff was in full song and a Goldcrest showed well in a pine tree. The road leads to Gairloch the largest community on the west coast and with it a sea loch of the same name. Looking into the loch provided us with nice views of three diver species, Red-breasted Merganser and auks. At Loch Ewe lunch was taken with European Shags and Great Cormorants giving good comparisons. On the roadside fields we noted several Redwings, Common Stonechat, Northern Wheatears and parties of European Goldfinches. Another diversion to Mellon Charles gave us excellent views of a drake Blue-winged Teal which had arrived two weeks earlier from North America. Laide had nothing new of note and Mellon Udrigle a single Dunlin and Ringed Plover. The last stop at Gruinard Bay had a large raft of Razorbills, a single Black Guillemot and a party of Barnacle Geese in a well-grassed field.

An early start today in order to get across to Corrimony to meet up with Simon the warden. As dawn broke we were on site watching the amazing lekking displays of Black Grouse at two separate leks. The number seen was 37 which included 5 female birds which are unusual in their presence on a lek. The common moorland and woodland birds were around and a Tawny Owl was heard hooting from a nearby stand of trees. Back to Inverness for breakfast and then to the Ness Islands an island with mature trees over 100 years old and several water systems around the island itself. A female Goosander showed well on the river and the mature trees attracted Coal, Great and Blue Tits, Eurasian Treecreeper, European Robin, Eurasian Siskin and Goldcrest. Time was getting on as I travelled to the spa village of Strathpeffer and two small lochans. Slavonian Grebes had returned to the lochan and were calling at times, also present were Little Grebe, Tufted Duck, Mallard and Eurasian Wigeon. The Novar Estate was next on the agenda with a shirt walk through the old pinewood forest where Coal Tits were very common. In the older trees Common Crossbill and Scottish Crossbill showed well singing and calling from the tops of the tallest trees. Our early morning start was catching up with some of the group as I went to the Cromarty Firth and Udale Bay. At the latter close views of geese and ducks and a bonus in a drake Green-winged Teal. Further down the road we caught up with Greater Scaup in a long, straggly flock. Back to base a tired but happy group.

Our last full day started with a visit to the Cairngorms where recent problems to the funicular railway were still ongoing. Despite this I found a pair of Ring Ouzel feeding on a path above the base station. It was time to visit the old woodland of Feshiebridge where we encountered two pairs of Crested Tits which can be tricky to find at times. The fields held Mistle Thrush a species which appears to like higher ground in Scotland to its southern counterparts. I then went towards Nethybridge with the River Spey holding Common Goldeneye and then into the Findhorn Valley. It was for some reason rather sluggish until a Golden Eagle appeared from nowhere and a pair of White-throated Dippers were located on the river.  Very quiet at the end of the road where we spoke to other birders who appeared to be having a tough time in finding anything at all. The last leg of the trip across the Farr Road was good for Red Grouse and a single Red Kite. All in all an excellent end to a trip in Northern Scotland.