We left the Black Isle and travelled to Inverness and along Loch Ness until turning west towards the Isle of Skye. Our first stop was Waterloo which is adjacent to Broadford Bay one of the better birding sites on the island. On arrival a scan of the mudflats and islands produced views of Bar-tailed Godwit, Greenshank and Common Shelduck. In the deeper waters Great Northern Diver, Great Cormorant and European Shags. In the surrounding trees Willow Warbler, Blackcap and a single Goldcrest which showed well. The road through Skye was busy with holiday traffic and we arrived at Uig in good time for the ferry crossing to Harris. From the ferry Common and Black Guillemots, Razorbill and Atlantic Puffins, Northern Gannet and two Manx Shearwaters. Arrived in Harris and travelled south to Leverburgh for the next ferry across to North Uist. A short stop was made for Northern Lapwing, Common Redshank and Dunlin. From the ferry Common Eiders were seen in good numbers along with a pair of Red-throated Divers and parties of Arctic Terns. The journey through North Uist and Benbecula went smoothly with a Short-eared Owl near the hotel which was to be the only sighting of the week.

A few birds around the hotel grounds included the endemic race of Eurasian Wren, European Greenfinch and Willow Warbler. Our first stop was Loch Bee which is at the northernmost tip of South Uist and an active rocket range. A look into Loch Bee revealed large numbers of Mute Swan, Tufted Duck, Mallard, Northern Lapwing, Common Redshank and ever-present Eurasian Oystercatchers. A short diversion towards St Michaels's graveyard and beach was productive for Bar-tailed Godwit, Ruddy Turnstone, Sanderling and Ringed Plovers. Along the way a stop was made to hear the first Corncrakes of the trip. A pair of Twite perched on a fenceline was a welcome sighting. Near the cemetery in offshore waters the group noted Northern Gannets, Great and Lesser Black-backed Gulls and Northern Wheatears feeding on the seaweed piles. I crossed the causeway into Benbecula with a stop at Coot Loch a good spot for wildfowl which duly obliged with sightings of Northern Shoveler, Gadwall, Eurasian Coot and several Little Grebes. Loch Fada is nearby where a male Garganey showed well with Eurasian Teal, Barn Swallow and Sand Martin. A drive around Balestrand added nothing of note so I headed to Loch Sandary which had Whooper Swans, Common Moorhen and at least three Eurasian Wigeon. Lunch was taken at Balranald with the machir providing us with close views of Eurasian Dotterel and singing Corn Buntings. Offshore waters held Great Northern Divers and passing Northern Gannets. Grenitote was visited where we added Grey Plover and Little Tern but a diversion to the machir on Berneray produced little of note. Ended the day at Committee Road where the wind was playing havoc with watching birds of prey. A male Hen Harrier showed well before I called it a day and went south to our base on South Uist.

By the supermarket a Sedge Warbler was in full song, shortly afterwards I headed towards South Glendale a small hamlet with trees and gardens. A short walk along the road added the commoner birds although some of these like European Robins are scarce on the islands. Smerclate overlooks the Sound of Barra and has extensive reedbeds and a shallow pool. Always worth a look but on this occasion was quiet apart from a migrating House Martin. A drive northwards added Dunlin, Northern Lapwing, Ruddy Turnstone and Common Eider. Loch Eynort was the destination for our lunch stop where we had great views of Common Cuckoo and a singing Blackcap. In the small wood Goldcrest, European Greenfinch, Dunnock and at least two Common Redpolls. Once in the open a view into the loch added a pair of Red-0throated Divers, Red-breasted Mergansers and European Shag. A diversion to Loch Druidibeg produced a pair of Black-throated Divers which was a bonus as they can be hard to locate at times. I decided to end the day at Loch Fada with a brief stop at Coot Loch en route. Loch Fada turned up trumps as we recorded brief but good views of a Red-necked Phalarope and an adult Golden Eagle which perched up nicely for us to observe. At least two Hen Harriers were also seen a fitting end to the day. 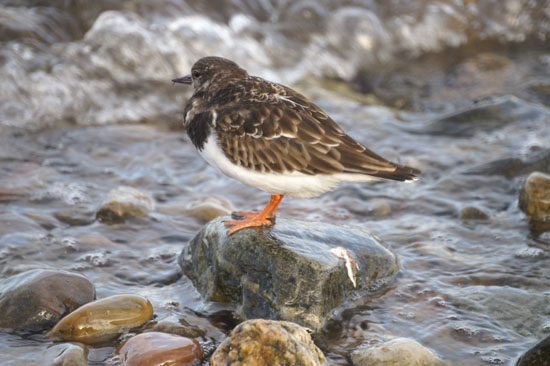 Checked out at Lochboisdale and made the short journey to Eriksay for the ferry crossing to Barra. Familiar birds were seen along the way which included a party of European Golden Plovers which normally pass through the islands in early May. The ferry crossing had the usual birds including good numbers of Great Northern Divers and Northern Gannets. Once on Barra I headed towards the far end of the island which has a good selection of habitats. Corncrakes were calling from the iris beds and a few Twite showed on telegraph wires. We caught up with more Common Redpolls, Common Cuckoo and Common Whitethroat the latter species only just arrived. Early afternoon we left Barra and headed towards Tiree the sunniest place in the UK. The ferry journey gave us excellent sightings of Manx Shearwater, Northern Fulmar, Great Skua and auks including Atlantic Puffin. Arrived in Tiree for our stay of two nights.

A full day exploring the delightful island of Tiree which is rather flat and exposed to the westerly winds from the Atlantic Ocean. Outside the hotel the sandy bay held Sanderling, Dunlin, Arctic Tern and Northern Wheatears. A slow drive towards the Coll end allowed us to study shorebirds in detail. The golf course had high numbers of Ringed Plovers searching for food. An inland cliff held around 30 Northern Fulmars who allowed a close approach. The hide at Loch Bhasapol gave us close views of Reed Buntings and Sand Martins whilst the iris beds revealed several Corncrakes which were easily seen and studied giving their crex-crex calls. Lunch at Loch a'Phuill proved to be productive as Harry located a Little Egret and a female Northern Pintail. In the same area Common Sandpiper and Great Skua were added to the day list. On the way back to Balemartine an unexpected Spotted Flycatcher briefly perched on a fence before disappearing into cover - a good bird for Tiree.

We were booked on the 0930 ferry to Oban so a quick drive towards the western end was made. The usual birds were around so back to the ferry terminus for our journey to Oban via Coll. The expected seabirds were noted especially south of Coll towards the Ardnamurchan peninsula. Black-legged Kittiwakes and all the auks in good numbers as they followed shoals of fish. Once in Oban I set off towards the picturesque Glen Lonan valley an exceptional place for birds and scenery. A stop at an old farm near a river added a pair of Long-tailed Tits searching for food. The mature trees had Willow and Garden Warblers, Blackcap and Lesser Redpoll. In the more open areas we caught up with Mistle Thrush, Common Cuckoo and a few Common Buzzards. Time was starting to run out as I headed back to Oban our base for the last two nights.

An earlier start today was rather dampened by persistent rain which was to dog us all day, this had an effect on birding especially birds of prey for which Mull is famous for. On arrival in Mull our first stop was at Loch Don where parties of Canada and Greylag Geese were present with goslings. A few waders were present in Dunlin, Ringed Plover and Eurasian Curlew. The weather had hatched several thousand midges which plagued us for the next few hours, this attracted Common Whitethroat and Willow Warblers in abundance. The road to Grasspoint passes through oak-woods which produced sightings of Blackcap, Tree Pipit, Great and Blue Tits, Common Cuckoo and displaying Common Snipe. A quiet sector of the river held Common and Red-breasted Mergansers and Common Sandpiper. The weather and midges were even worse at Pennyghael with no birds present so I went on the scenic Salen road. This proved to be good as a sheltered field attracted a pair of Eurasian Bullfinches, Northern Wheatear, Common Stonechat, Song Thrush and Meadow Pipit. On the north coast a series of cliffs attracted Common Kestrel and a hunting female Peregrine Falcon. The icing on the cake was a adult White-tailed Eagle fling up the loch towards us a fantastic end to the day on Mull.

Checked out at Oban and headed to the Corran Ferry near Fort William. Before leaving Oban sightings of Common Swift and Carrion Crow. Today was to be another testing one regarding the weather and birdlife. Our first stop had Western Jackdaws a rather localised bird in the west. Next was an area of river and forest where the open water and grass islets attracted Common and Red-breasted Mergansers, Common Greenshank, Common Sandpiper and Ringed Plover. The trees and scrub had Common Whitethroats, Tree Pipit, Blackcap, various finch species and Lesser Redpolls. A walk through the woodlands beyond Salen was enjoyable for the commoner woodland birds and a Grey Heron colony on a small offshore island. Lunch taken at an overlook with a movement of House Martins and an unusual bird in the form of a Yellowhammer. Despite a lot of searching we added nothing new for the list. Back to the ferry where a Black Guillemot showed and onto Inverness and the Black Isle where the tour concluded.